With an impressive five-car entry for the double-header race weekend, KMR will look to get off to a strong championship defense in Porsche GT3 Cup Challenge USA by Yokohama competition. The team has competed in every event since the series’ inception, and has once again set its sights on another championship season in 2017. 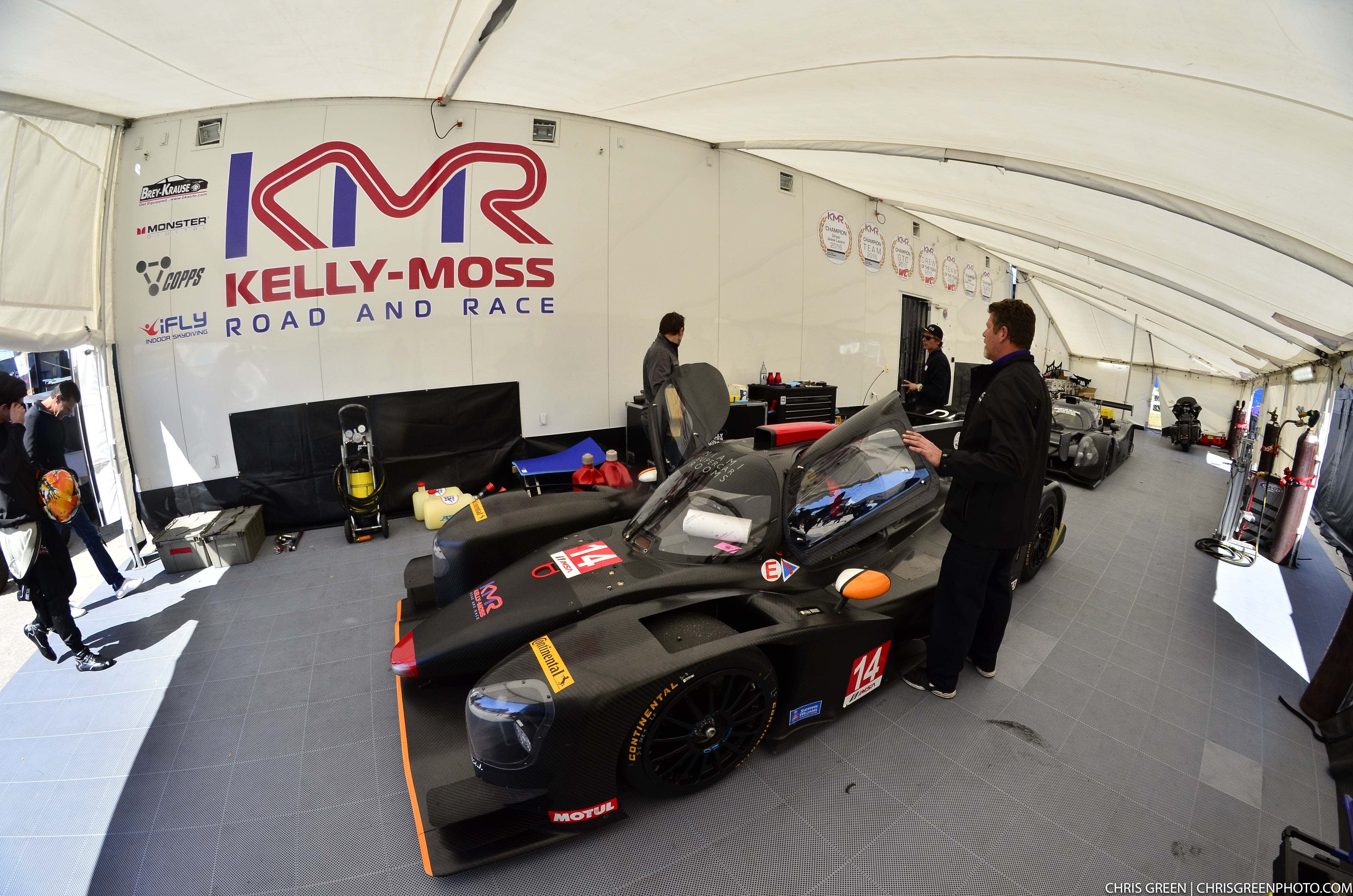 The Sebring weekend will also play host to the season-opening IMSA Prototype Challenge presented by Mazda event, which will see KMR make its first-ever start in the championship, debuting the Norma M30 machine with returning champion driver Colin Thompson behind the wheel. Carrying the colors of Ignite Payments, Mattoni Water, Brey Krause, Sherwin Williams, Ernst Benz and Edoardo Borrelli, Thompson was able to post impressive times in testing last week as the team did its first official running with the car ahead of the races this week (Thursday – Round 1 / Friday – Round 2).

“A lot had to come together just right for us to have the car ready to go for testing, and even though it meant a lot of midnight oil, the car was prepared perfectly to be able to make the most of every session last week,” said team owner Jeff Stone of the North American debut for the new LMP3 machine. “We were encouraged by our pace even though we’ve only just started to get to know this car.”

After winning a pair of championships behind the wheel of a Porsche with Kelly-Moss, the move to an LMP3 machine is one that has Thompson excited for the Sebring opener. 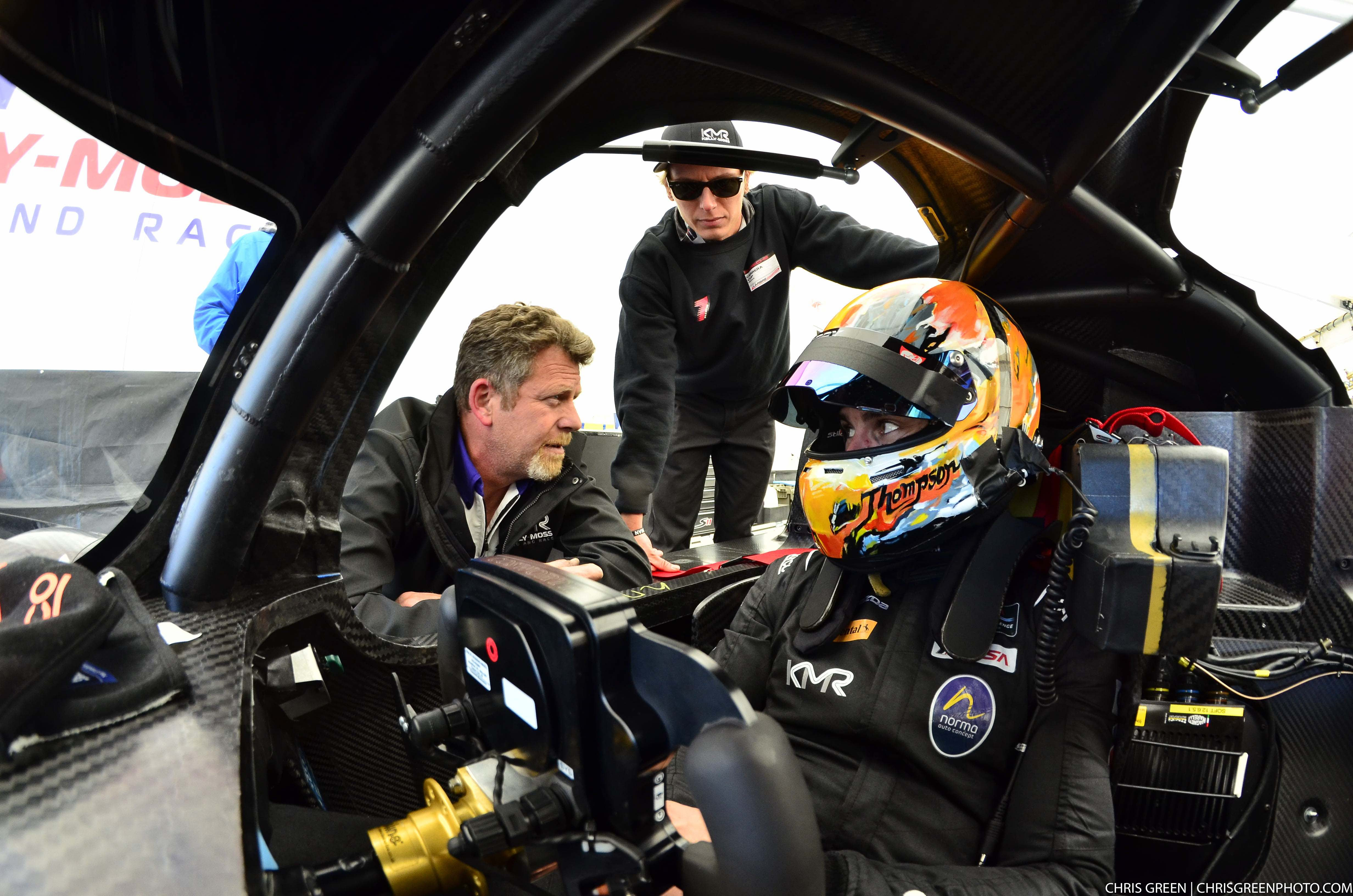 “Honestly going from a GT car to an LMP3 car could not be more opposite,” said Thompson. “You’re going from a car that relies mainly on mechanical grip into a car that is almost entirely dependent on aerodynamics. You just have to completely change your philosophy. The car works well and it is currently the only one in the world so everything is fresh to us but we have had unbelievable success right out of the box, so we are confident going into the Sebring weekend.”

The Sebring rounds of Porsche GT3 Cup Challenge USA competition also mark the first Stateside race for the all-new Porsche GT3 “911.2”, which will comprise the Platinum Class and features increased power as it carries on the longstanding Porsche tradition of constant improvement and evolution.

KMR will have two entries in the Platinum class with Jake Eidson (Littleton, Colorado) driving the No. 24 machine as he looks to convert the IMSA Hurley Haywood GT3 Cup Scholarship into a big year of results with the defending championship squad. Eidson made two starts with the team in 2016 at Road America, scoring a double-podium weekend as he twice finished runner-up to his KMR teammate and eventual champion Jesse Lazare. 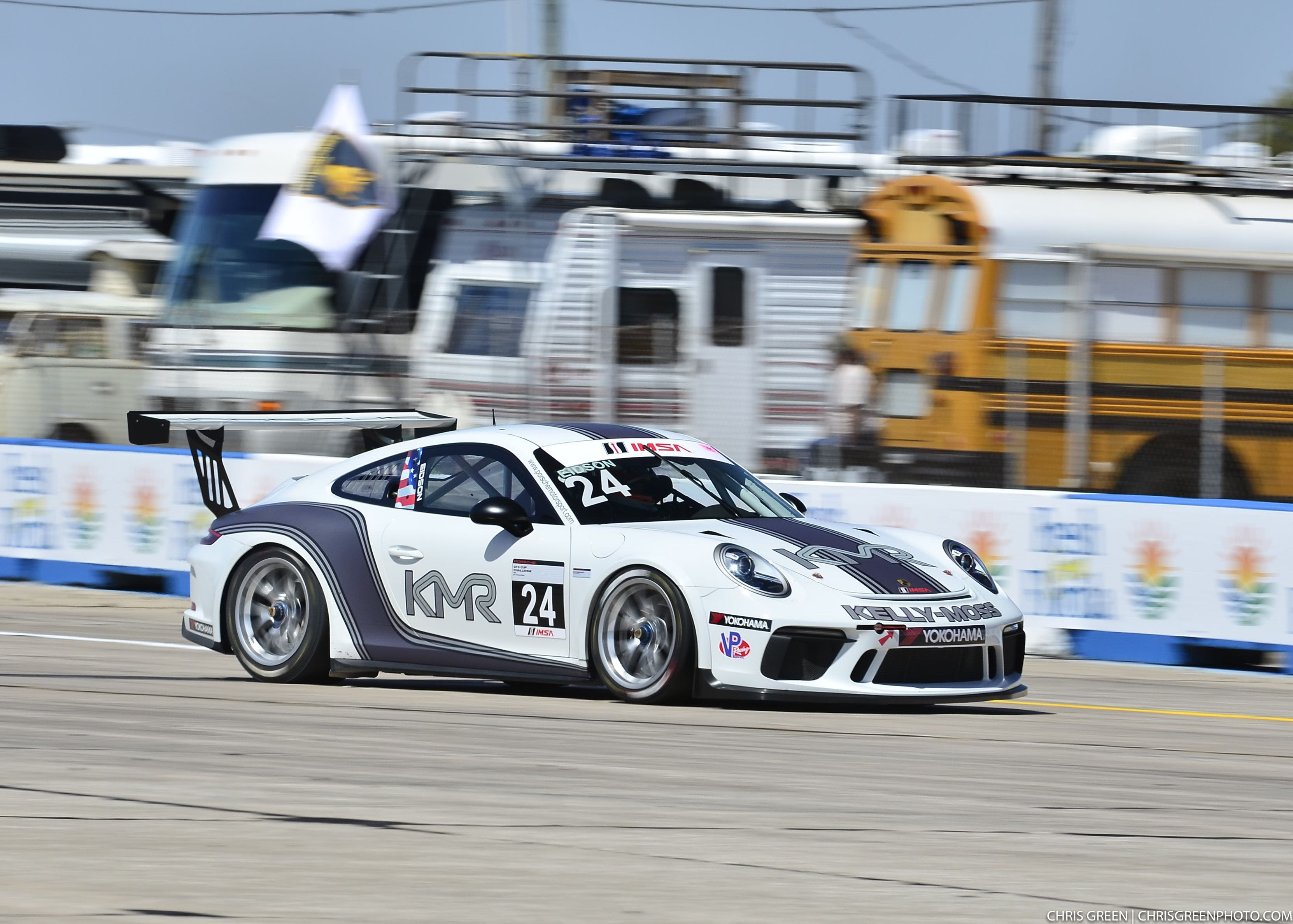 “I was fortunately able to test the new 991.2 and immediately I noticed the new car has a bit more torque and pulls out of the corners better,” said Eidson of the Platinum class machine. “I really enjoyed learning some of the new features on the car and the Kelly-Moss team made some changes to help adapt to the new car. I didn’t have to change much of my driving style, but tried learning what inputs the car does and doesn’t like.”

Eidson will look to get his 2017 IMSA effort off to a fast start on a track that already has some fond memories for the young American.

“I absolutely love Sebring raceway, it was the track where I won my first open wheel championship and the first track I ever drove,” said Eidson. “My favorite corner has to be turn one because It’s very fast and bumpy, so it gives the opportunity to capitalize on other drivers mistakes!”

Also set for the Platinum class is the experienced Tom Haacker, who will also be eligible for Masters Class honors as he relishes his run in the all-new Porsche GT3 machine. 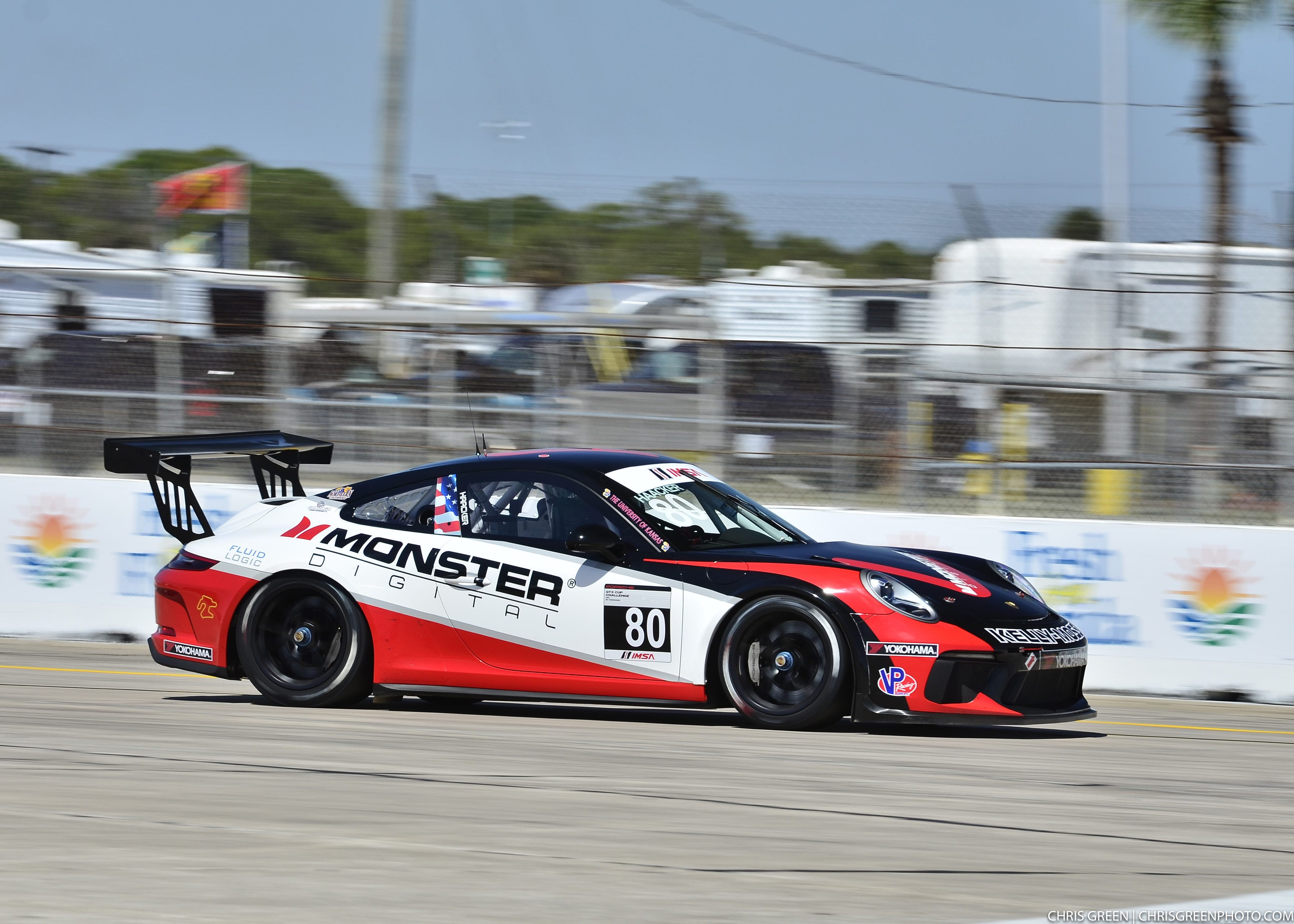 “I love the (new) car!” said Haacker, who will carry Monster Digital support at the Sebring event.  “The Kelly-Moss guys have got her dialed in and the power/torque is quite noticeable. The car requires smoother inputs than the 997.2 which I’ve become most accustomed to. This is a most incredible and iconic racetrack, I think the most exciting racetrack I’ve ever driven. I ran here in 2012—a baptism by fire! I was overwhelmed with the track and the talent in the series. I have had plenty of experience behind the wheel since then so I’ve come back to Sebring for two reasons: I loved the track and to challenge myself to the track and the talented drivers in this series.”

KMR will have a three-car entry in the Gold class and will look to convert the team’s extensive experience with the 2014-2016-era 991 machines into a fast start to the year. 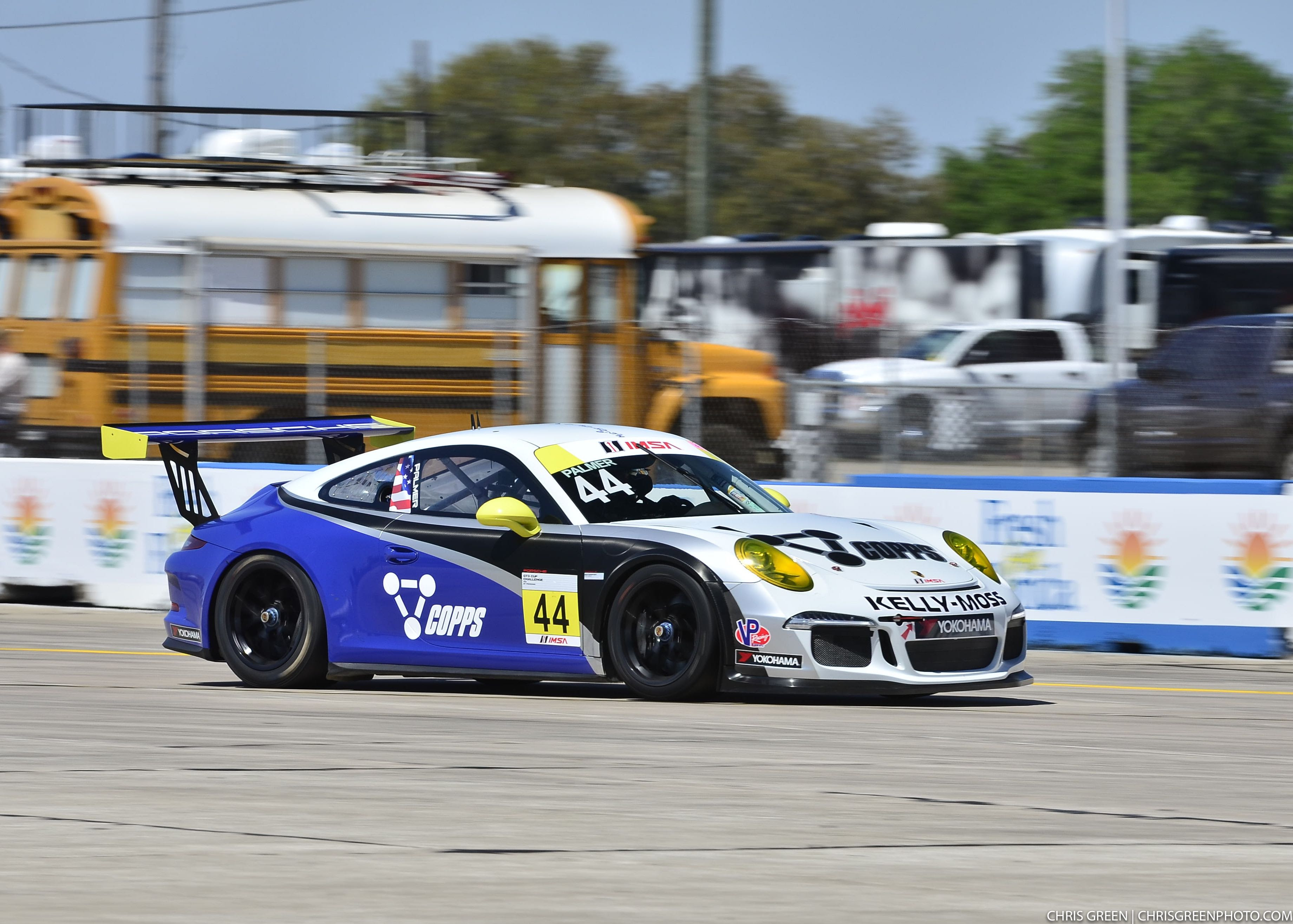 Greg Palmer of Colgate, Wisconsin will be making his IMSA debut this weekend and is hoping that he can add to his list of positive Porsche experiences on the bumpy Florida track.

“This is my first IMSA level race and I’m looking forward to being out on track with 30 other Porsche nuts like me!” said Palmer, who calls Bishops Bend his favorite section of Sebring. “I ran the PBOC race weekend back in January and had a blast.  I had a great battle at one of the races and finished fourth which was my best result of the four races I ran.” 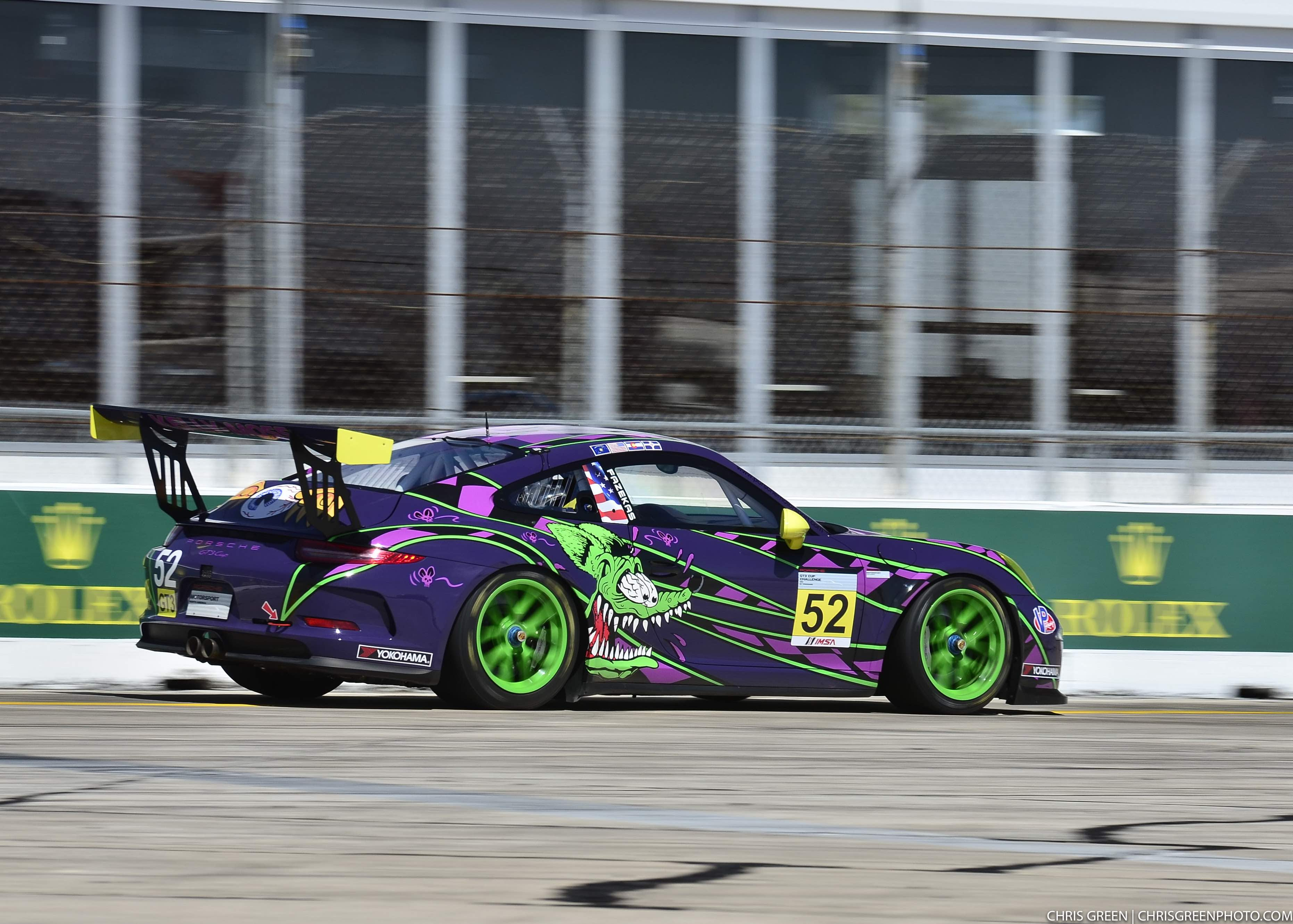 Marking his first race back in the series since a significant crash last season at Watkins Glen, Fazekas is focused on a podium return.

“I’m hoping to finish on the podium in the Gold class in both races,” said Fazekas.  “Trying to drive as smart and as clean as possible.  It would be nice to bring the Rat Fink #52 back to the paddock in one piece.   I enjoy turn 17—it’s difficult to master and I’m still working on it.  I had fun at the Sebring PBOC event in January, it was nice to knock the some of the rust off!”

Additionally, the No. 99 iFly Porsche GT3 will compete in the Gold class. 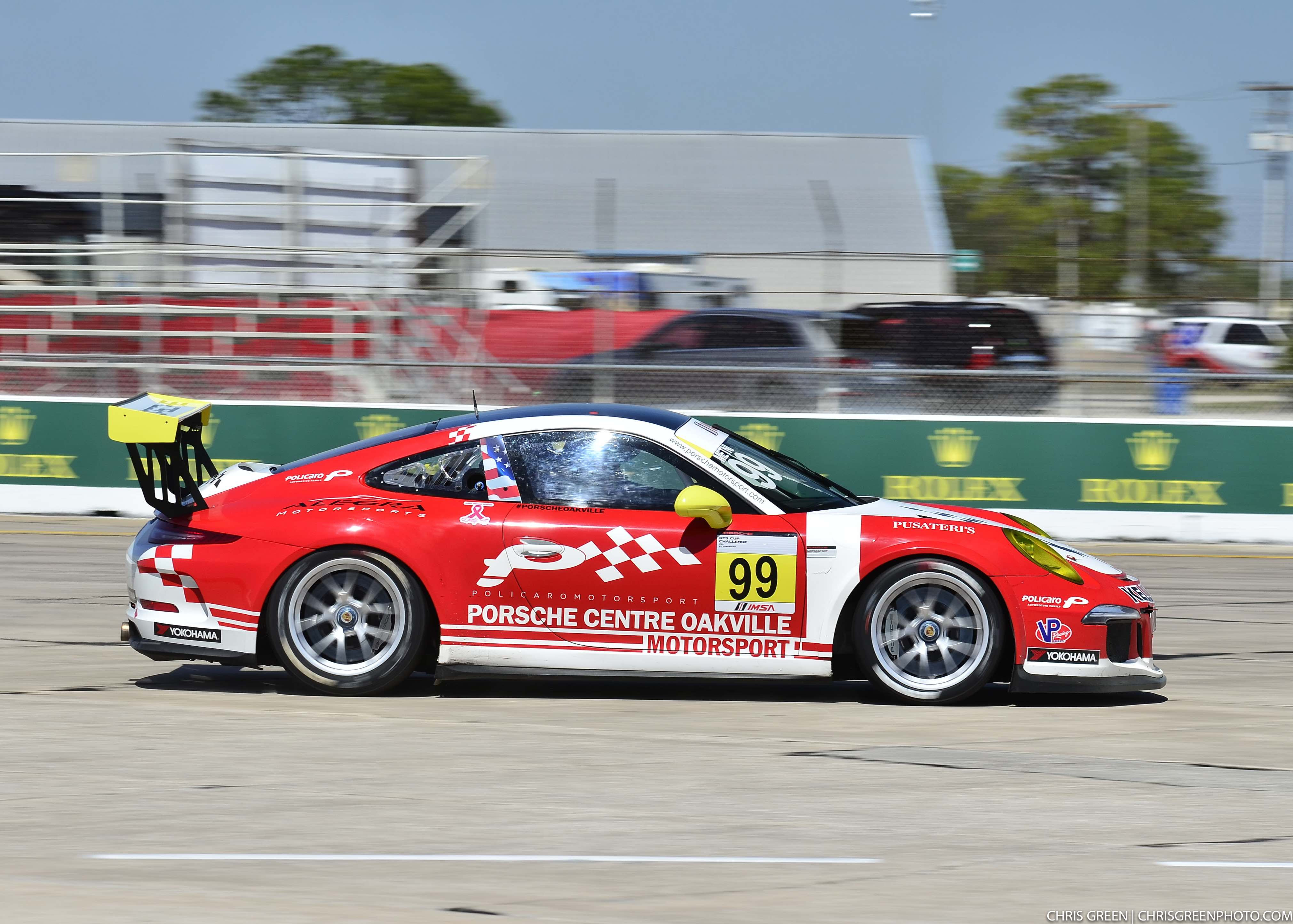 The Sebring 12 Hour race weekend will kick off with a promoter test day on Wednesday, March 15, with the Prototype Challenge races set for 4:25 PM ET Thursday and 5:35 PM ET Friday. Follow IMSA.tv to watch live streaming of the races.

2017 is the 29th season of competition for the Madison, Wisconsin-based team

No photos. Maybe you entered a invalid hashtag.